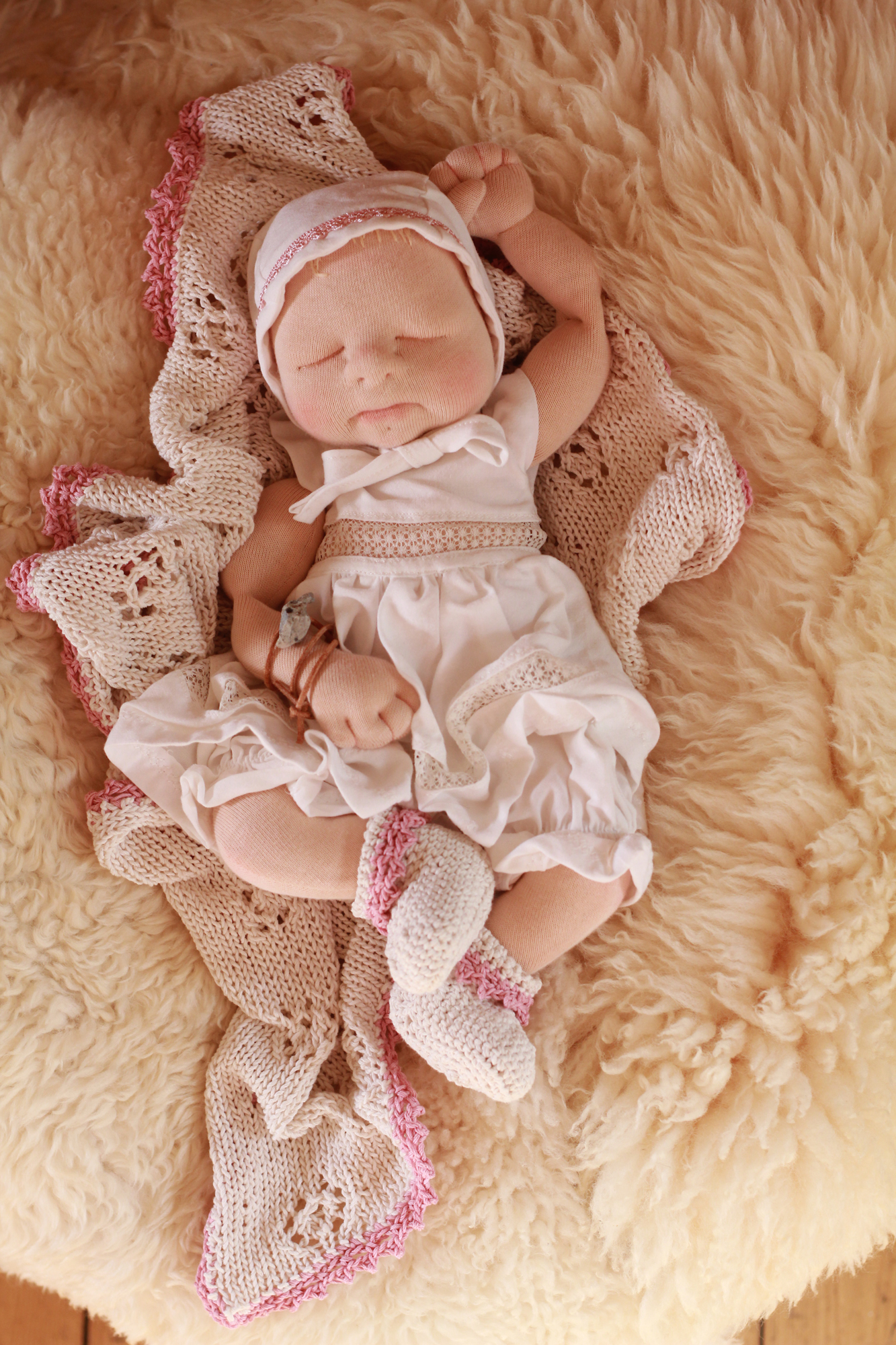 Sometimes there is a story in my head and I don’t even know where it’s coming from. When I looked at this baby’s face and thought about our trip to the Baltic Sea there it was. The story of Emilie. Which, I am afraid, is a rather sad one.

I wrote it in English since most people understand it. I hope there aren’t too many grammatical errors and misused words  🙂

Once upon a time there was a girl, almost a woman, from a good family with a certain amount of wealth. No, they were not rich. But they lived in a decent house and the girls parents did not have to work too hard. Let’s say her father was a clergyman.
The girl was pretty and nice so her parents hoped for a suitable husband. But she desperately fell in love with a young, handsome fisherman who lived in a small shack by the sea. He loved her back so they married even though he was sorry that he couldn’t offer her much. 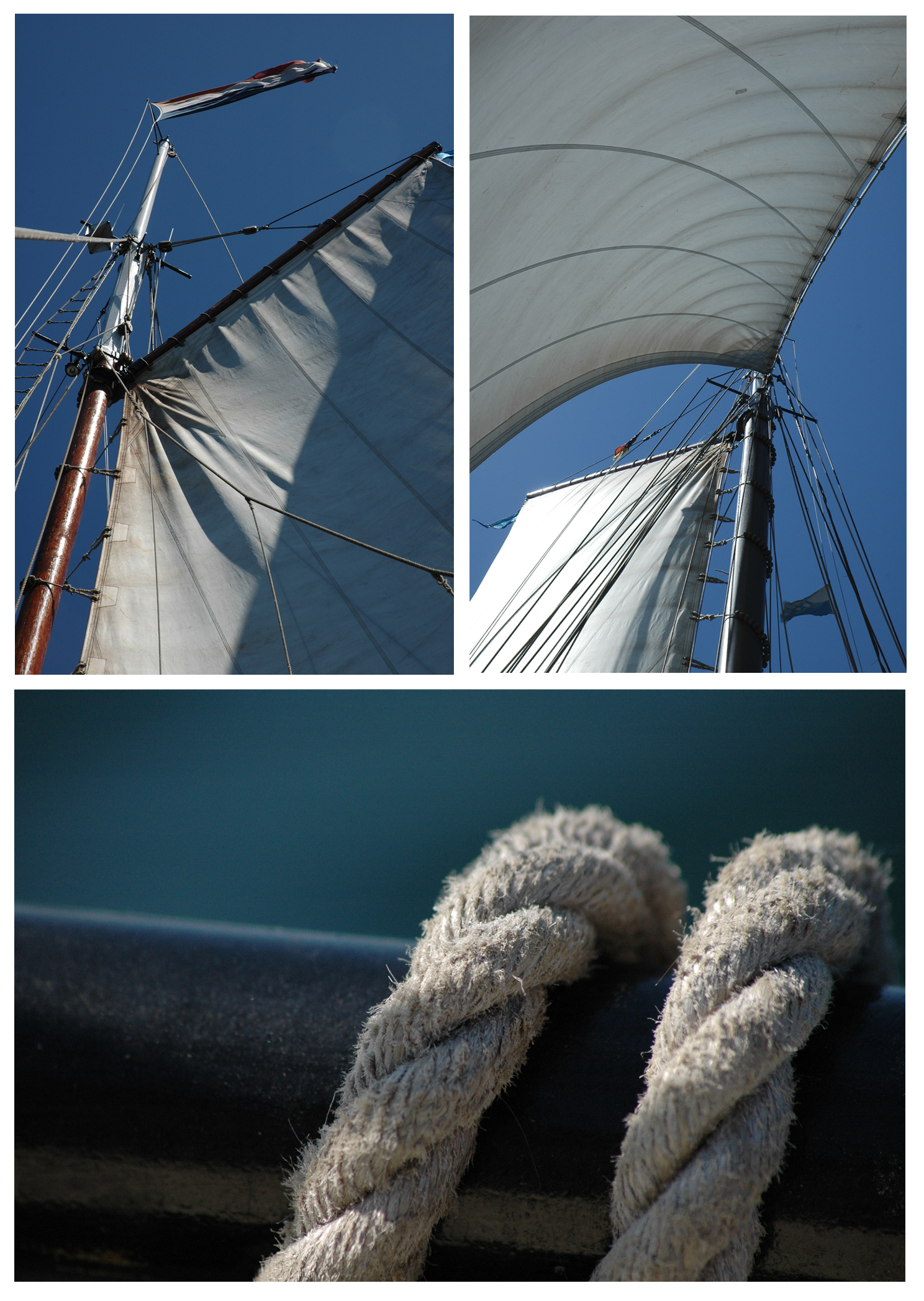 The young woman moved in with him and did everything she could to make their home comfortable. Soon the shack was neat and cozy and the fisherman came back from his daily work always finding something delicious to eat left on the table and his wife laying down in their narrow wooden bed waiting for him.

The months passed by. The woman’s hands were no longer soft and tender but strong and rough and they were still happy together. But there was something missing, the woman thought. There was no child growing inside her and she started to feel a bit sad about that.
She still did her chores and loved her husband dearly but she was not as happy as before.

One evening when the fisherman came home he found her sitting at the table, crying. He was scared because he thought she was happy with him and he begged her to tell him everything. When he found out that she longed for a baby he told her he loved her more than anything and if they had a baby he would love it, too. But in the meantime he was glad that he had to earn money just for the two of them and not a bunch of children with whom they would have to share the small space in their hut. But one day, he was sure of it, they would have a little baby and it would be so very loved by them. 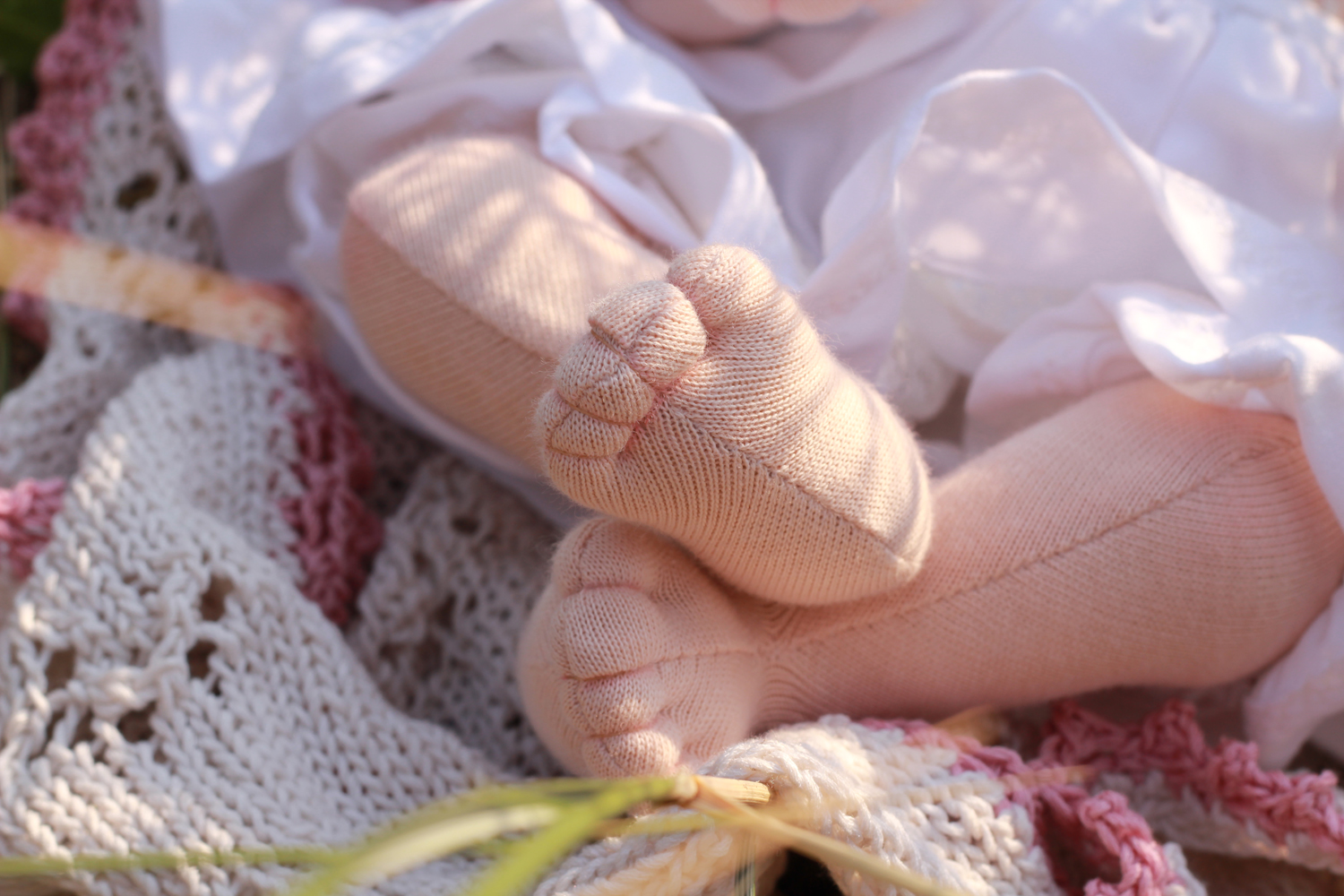 This night the fisherman had to sleep on the floor because they had their first fight.
But over the next day when the man was working on his fishing boat his wife thought about his words and finally found them true.
It took some time but then she was not so sad anymore. Sometimes she took out her dowry linen and imagined her future baby wearing it. Then she smiled.

The years passed by. The fisherman and his wife were not young anymore but not old yet. They had some wrinkles from the sun and the salty sea weather, but they still looked upon each other with lover’s eyes.
The dowry linen stayed in the wooden chest almost always now as the woman’s hopes for bearing a child had dwindled. But she got used to her life without children and felt at peace. 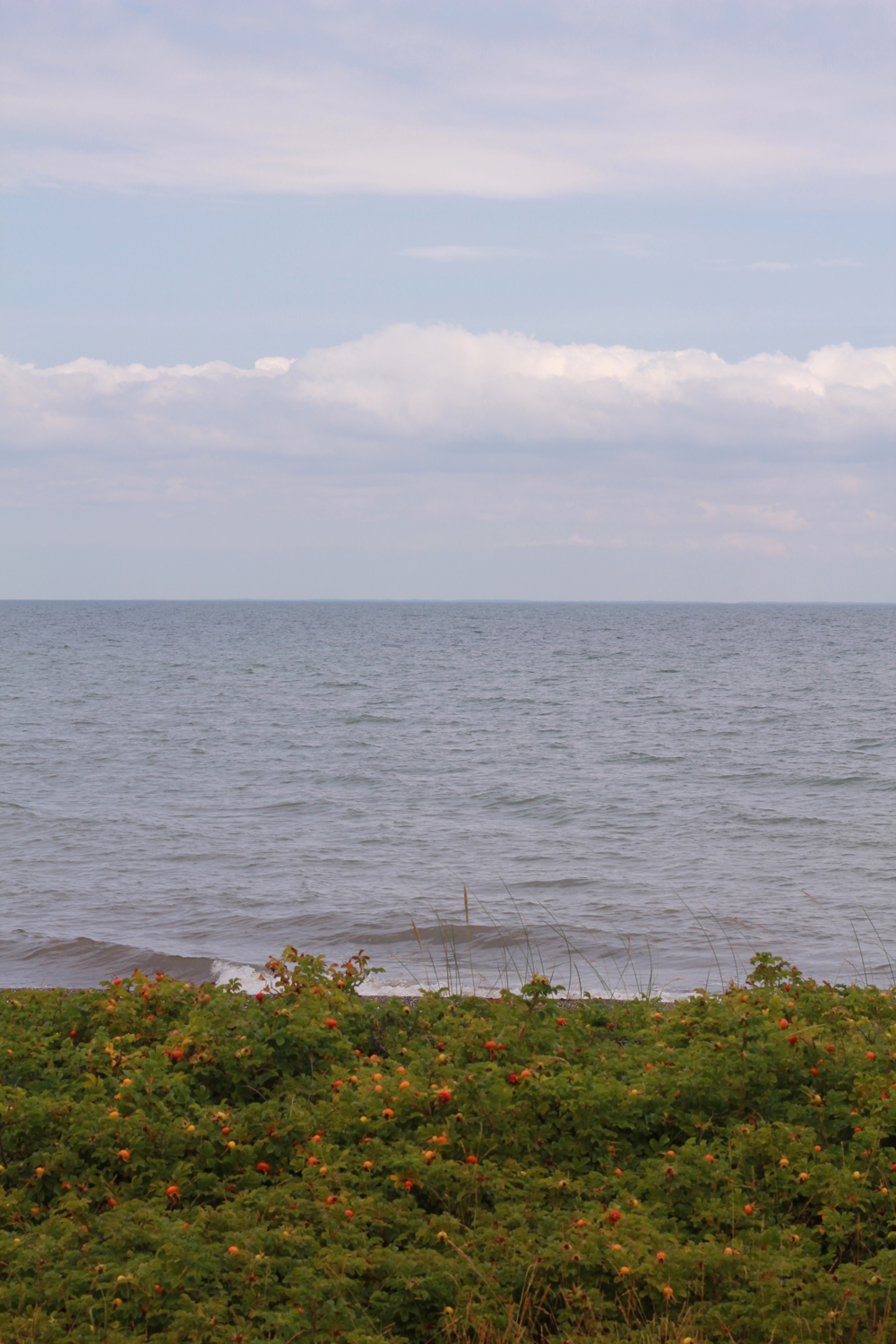 She developed the habit to sit at the beach when her husband was at sea fishing and to look at the sometimes still sometimes storm-battered water. The people in their village got used to that sight although they sometimes made fun of her having nothing to do but sit and wait. 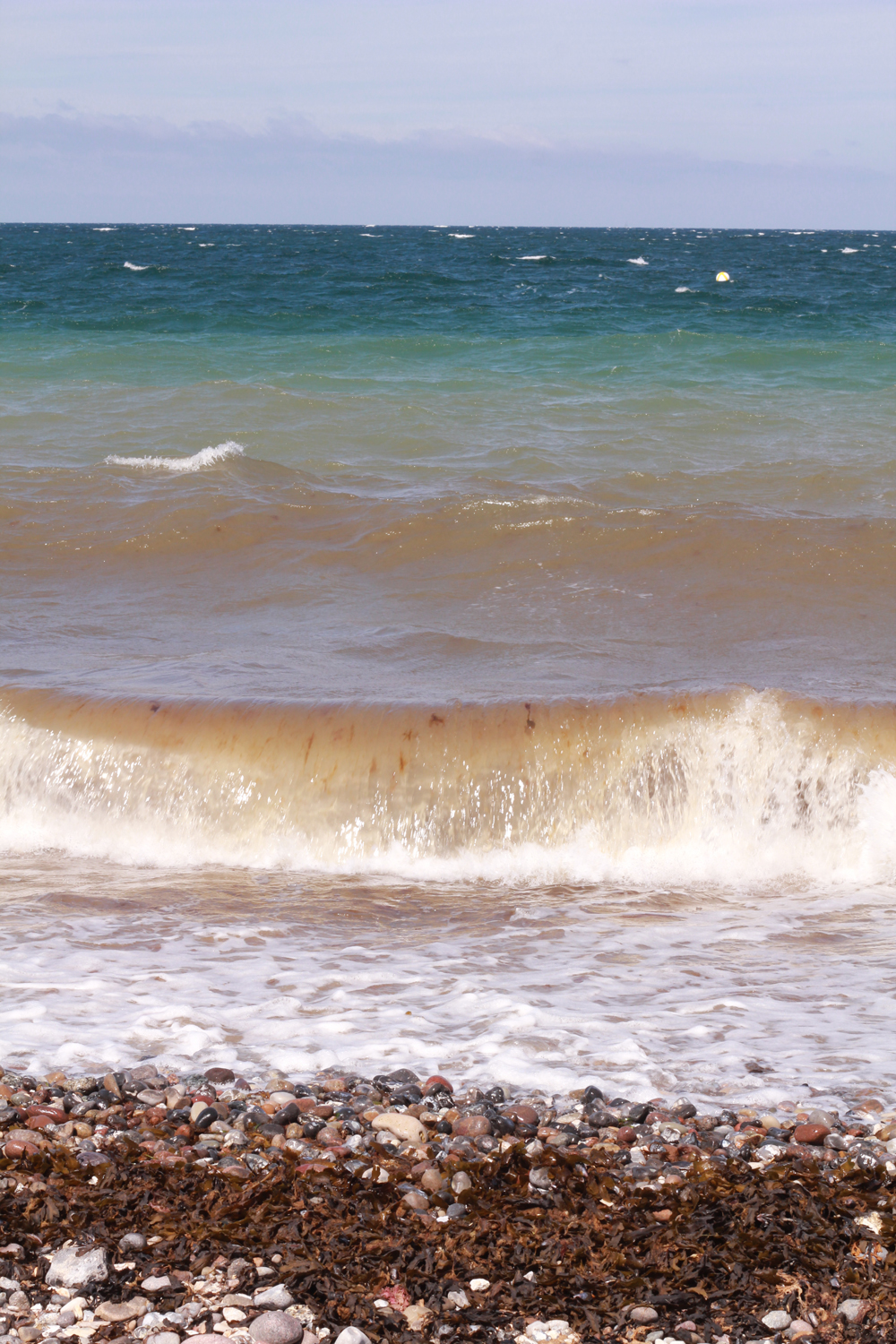 And then! When she had abandoned all hope for ever becoming a mother she found out she was with child.
There was so much joy in that small shack. The couple was happy and excited and he told her all the time „I told you so, didn’t I?“.
It was an easy pregnancy and when the time came it was an easy birth, too.
It was a baby girl and they named her Emilie.
The woman took out her dowry linen and sewed some delicate dresses for her tiny daughter.
Again the people in the village made fun of all those fine clothes which where – in their opinion – too fine for the daughter of a fisherman, but the woman didn’t mind. She waited so long for her little princess so Emilie would receive nothing but the best.
The world had never seen more happier parents than the fisherman and his wife. And Emilie made it easy for them. She slept well, fed well and was never ill. 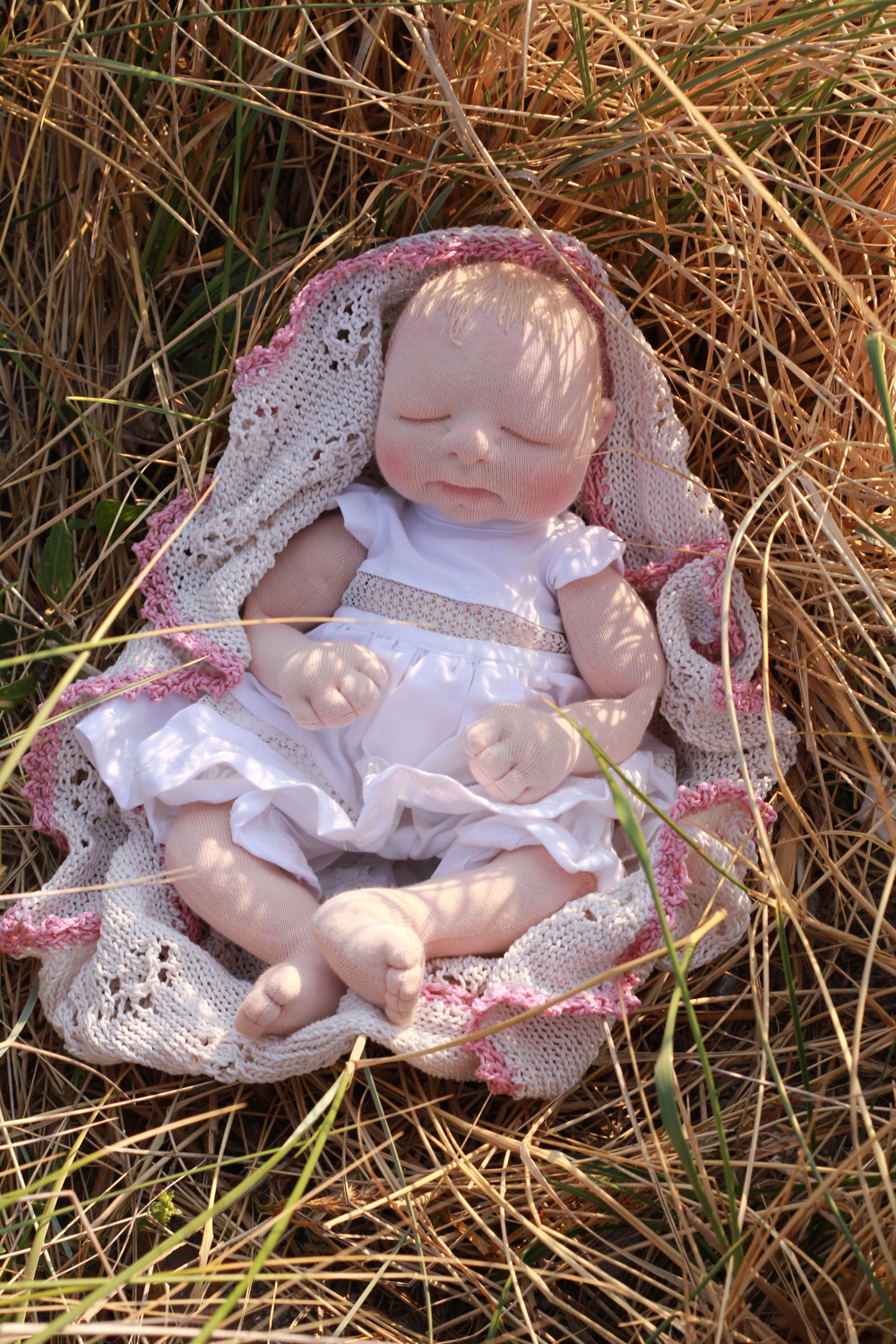 The woman took Emilie with her to the stony beach, made a soft pillow out of dry sea weed and laid her gently on it. 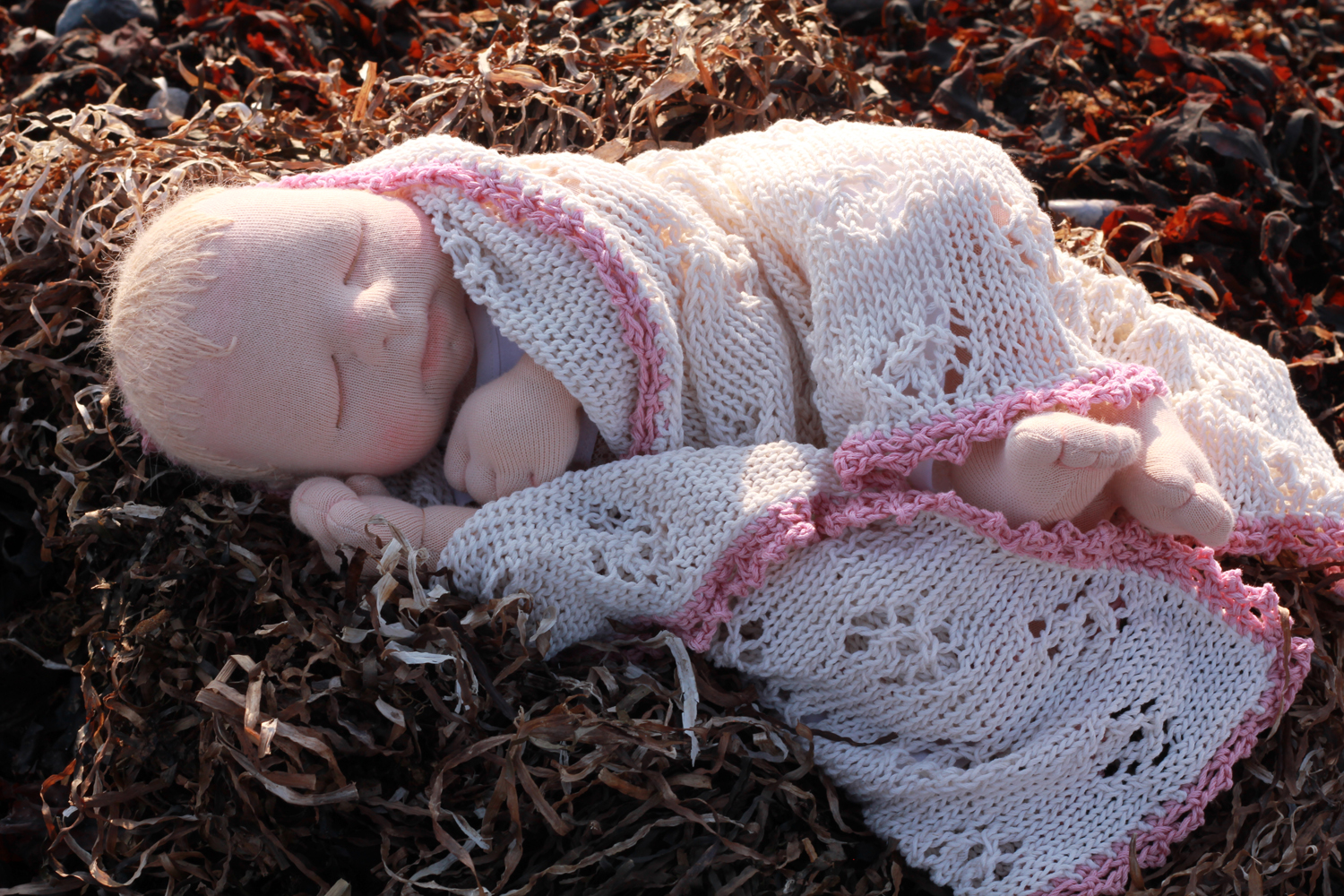 Emilie slept there peacefully while they both waited for the husband and father to return from the sea. 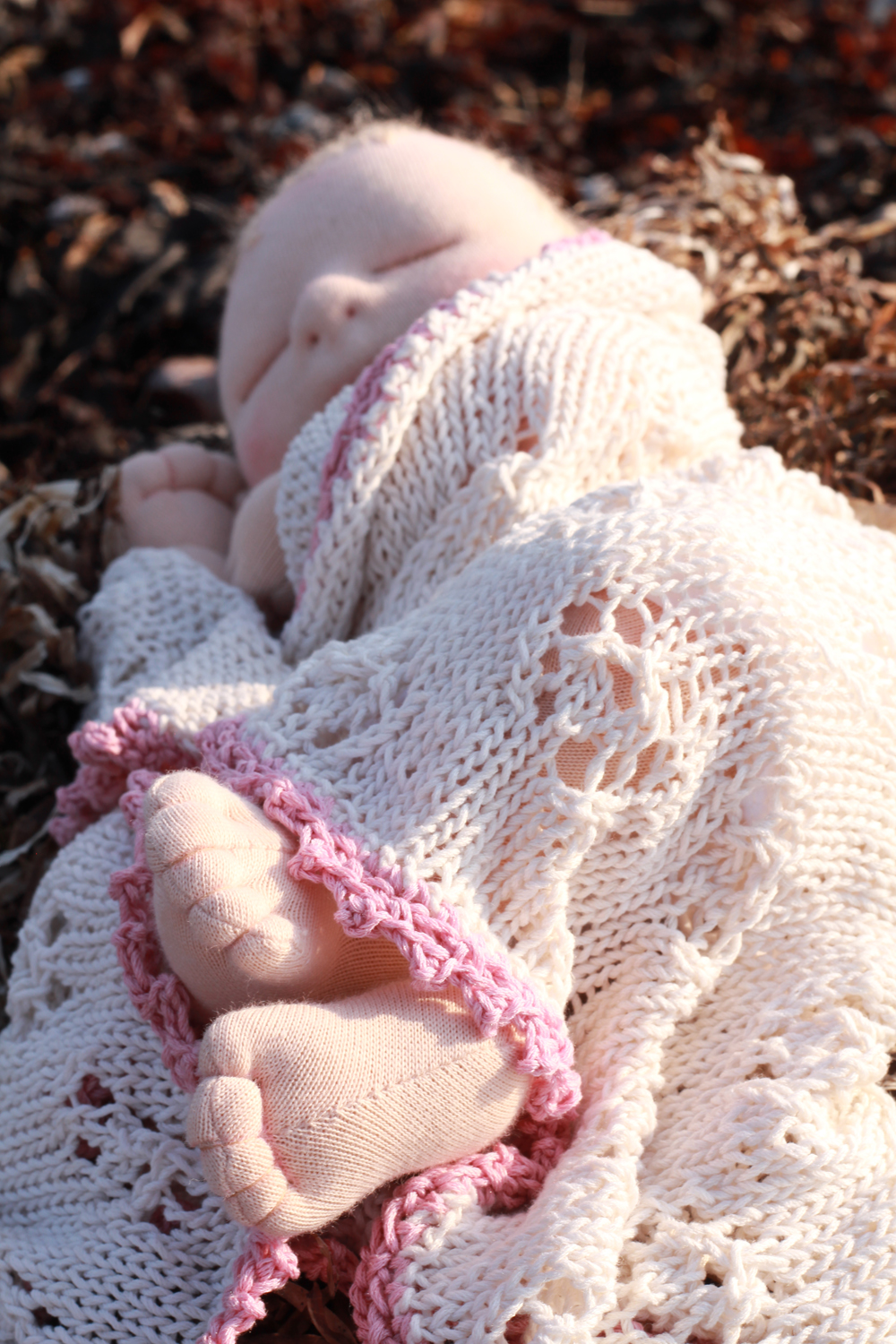 When Emilie was a few weeks old the summer turned slowly into fall bringing some early autumn storms with it.
Since she was a strong, healthy girl the woman kept on taking her to the beach. 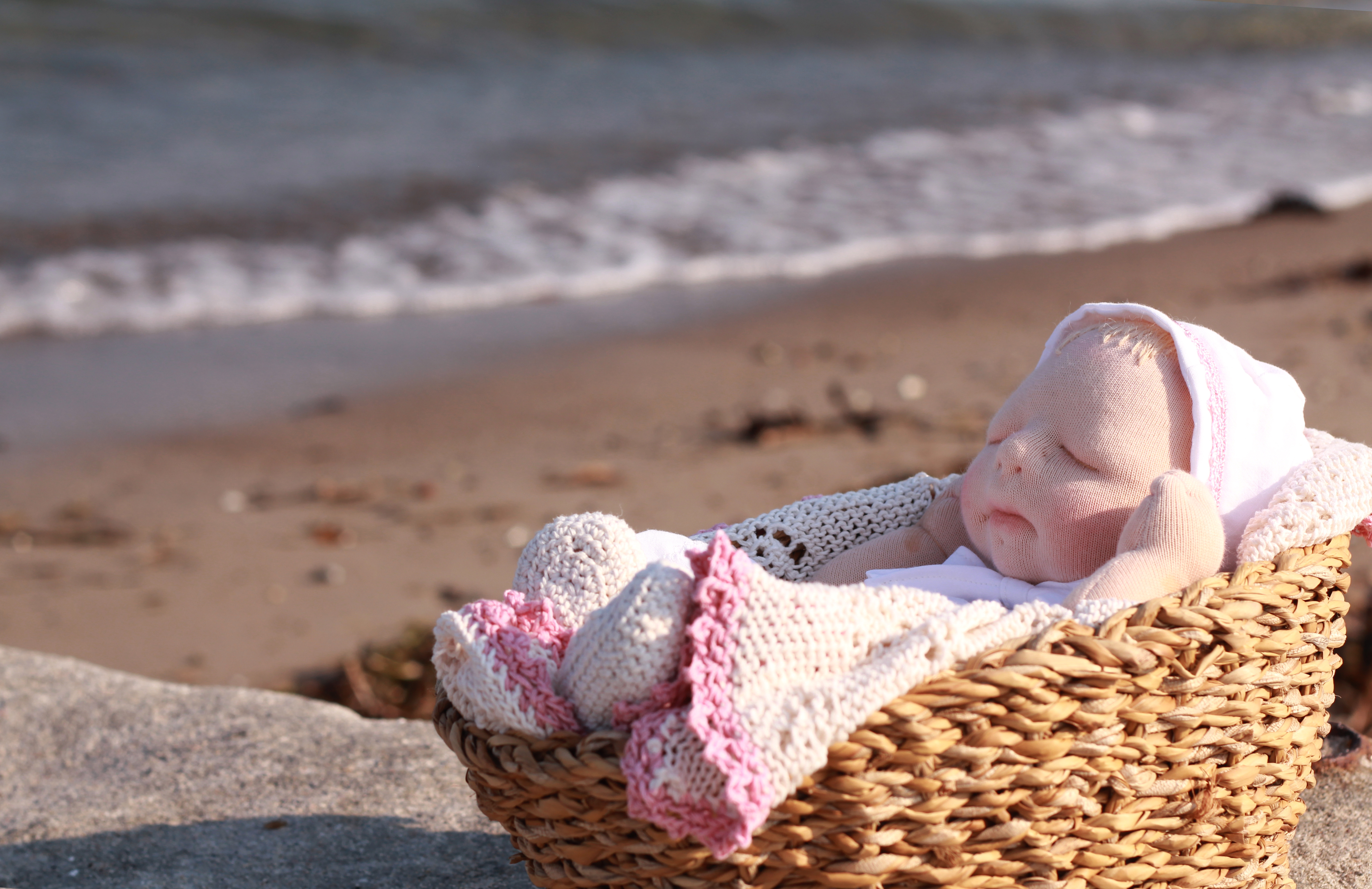 One day there was such a fierce storm that Emilies mother first thought about going home early. But there was something that hold her there on that windy, cold and soon dark shore. All the while she had Emilie with her, calmly sleeping. That baby was a miracle, for sure. 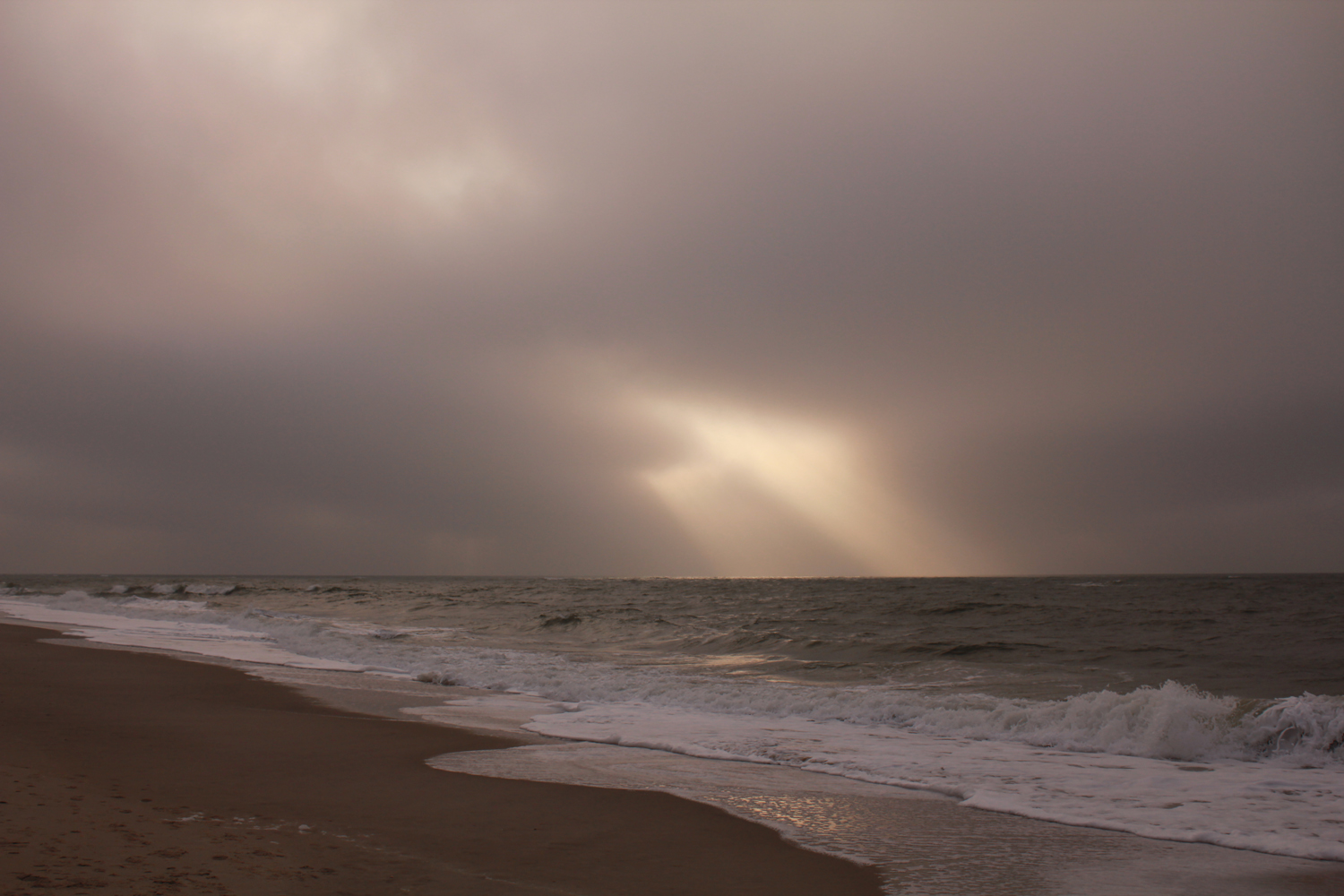 On the next day two villagers who wanted to search the beach for washed up goods found the little infant. Of course they knew it was Emilie, the daughter of the fisherman and his strange wife.
There was no trace of her and when they took Emilie to the family’s shack they didn’t find their parents there, either.
Soon the villagers got worried as it turned out the fishing boat on which the fisherman had worked all his life had sunk and not all of the men had made it to the shore alive.
The fisherman’s body was found at the beach two days later. But his wife was still missing.
What had happened? Did she see the boat turn over? Did she think she could save her husband? Did she know he would not survive and went into the water because she did not want to live without him? What about Emilie? Surely she must have realized she would leave her helpless daughter behind?
So many questions and none of them could be answered.
The only hint was a small adder stone which Emilie carried around her right wrist. Did her mother give it to her for protection knowing she would have to live her life without her loving parents? 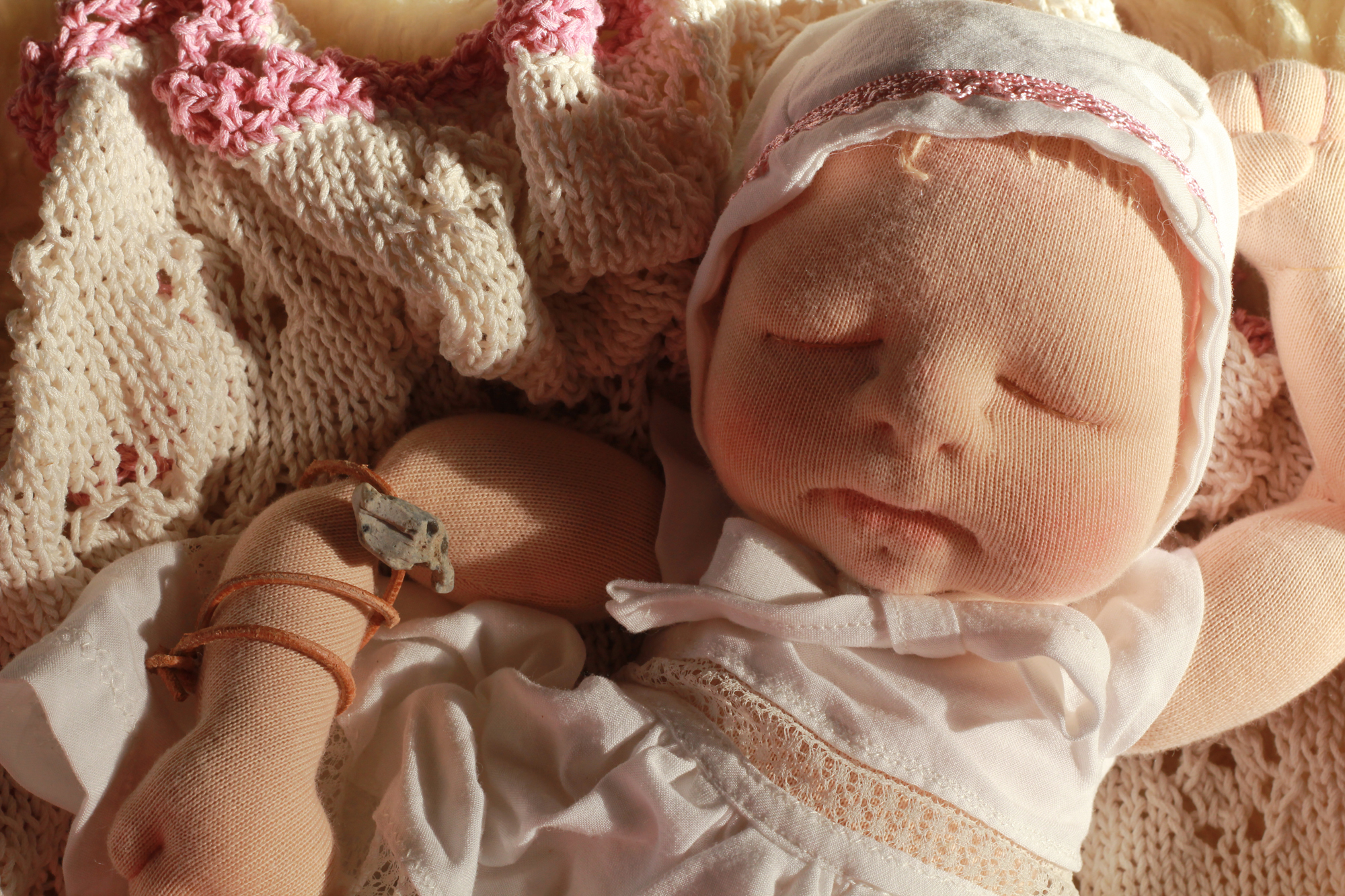 After these events, I am sad to tell, Emilie is not so quiet anymore. She cries a lot and can you blame her? Of course she misses her mother and father. She is in desperate need of a new mother who will take her in and give her all the love and care she used to know.

If you want to adopt her you find her, for now, in a small shop in Bremen, Germany, called Mika. It is located on Karlshafener Straße 1, 28215 Bremen and is open every Tuesday, Thursday and Saturday from 10 to 13h.
Emilie comes with her bloomers, a dress, a hat made from vintage cotton and with shoes and her blanket knitted and crocheted from linen thread. And she wears her adder stone, of course.
Emilie has embroidered hair and is able to hold a pacifier without a magnet. I tested this by shortening the teat of a regular pacifier but maybe there are toy pacifiers which will work, too.
She will be available for 160€, a special price, since she is the first doll I put up for sale.